Rambler.ru becomes the latest target of cyber-attack- 100 million users at risk of exposure.

It is called Russia’s answer to Yahoo. It is very popular in Russia and hundreds and thousands of users are actively using it.. it is called Rambler.ru and today, it is in the news for all the wrong reasons.

The popular Russian website Rambler.ru has reportedly been a victim of a security breach and data hack back in the year 2012. The result of this hack attack was that roughly 100 million users’ data was compromised including usernames, passwords, ICQ number and other critically important private data.

The report has been published by the well-known data breach index service LeakedSource who has labeled it as a “Mega Breach.” The site further noted that:

As per the analysis by LeakedSource, Rambler.ru users are provided with a username and the same username becomes part of their email address on the website. For instance, if you have created a user ID such as Hackreadiscool then you will use this ID to login to your account on Rambler.ru and the email address [email protected] will become your official email address on this website, which people will use to communicate with their contacts.

The data breach index website LeakedSource claims that the primary reason why Rambler.ru became a victim of this mega breach is that the password strings were not hashed. That is, the passwords were stored in plaintext format.

Now, we all know how insecure it is to store password string without any hashing or salting. So, most of the blame can be attributed to Rambler.ru’s security measures and salient practices.

The passwords were also quite weak. Such as there were passwords like “asdasd,” or “666666,” which are not only weak but also quite easy to brute-force. When the site conducted data verification process in collaboration with Russian media and journalists including Xakep.ru’s Maria Nefedova, it was identified that data was authentic. 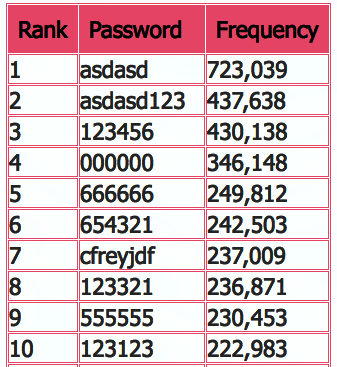