Pluton is a new security chip designed by Microsoft in collaboration with AMD, Intel, and Qualcomm to improve processors’ security. This chip will be part of all client CPUs the chipmakers will make in the future.

Hardware flaws such as Meltdown and Spectre made it possible to steal passwords and confidential data directly from the processors, which encouraged chipmakers to develop a totally new approach to enhance chip security.

According to Microsoft, Pluton is the answer to this issue. It will serve as a hardware root-of-trust, the Trusted Platform Module (TPM), to protect the computer hardware from getting tampered with and make it difficult for hackers to exploit low-level firmware flaws in the device.

TPM’s problem is that hackers have devised ways to intercept data exchange between the CPU and the chip and the bus connecting these two components. Microsoft will move the functionality to the CPU to prevent this interception.

Once integrated inside the upcoming Intel, Qualcomm, and AMD processor units or the CPU, it will become much complicated even for hackers having physical access to the device to launch hardware attacks and steal sensitive data. 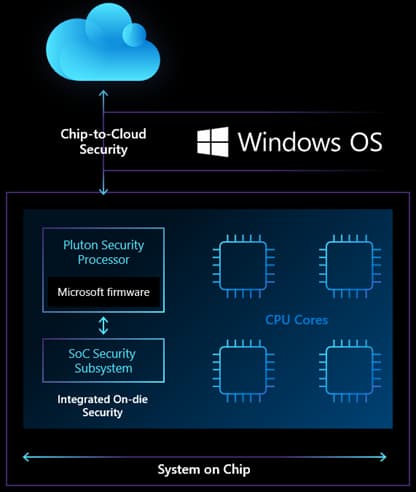 Apart from enhancing security for Windows applications, Pluton will make it simpler to download and manage firmware updates by eliminating the need to look for patches to address new security issues as it will keep the firmware updated.

Pluton will achieve this by creating a tighter integration between the Windows OS and the hardware to reduce the attack scope, stated Microsoft’s director of enterprise and operating system security, David Weston.

“Pluton also provides the unique Secure Hardware Cryptography Key (SHACK) technology that helps ensure keys are never exposed outside of the protected hardware, even to the Pluton firmware itself, providing an unprecedented level of security for Windows customers.,” added Weston.

Intel spokesperson said that Pluton processors would be rolled out in the next few years.

Pluton will be compatible with most Windows features that rely on the TPM chip, such as BitLocker, Windows Hello, and System Guard, and will support any software that relies on TPM APIs.