Although these apps have been reported to Google, they are yet to be removed from the Play Store putting Minecraft users at risk of further scams.

It’s true, gamers for some reason that has been largely un-understood by us normal people spend hundreds of dollars on buying games and the in-built features that accompany them. However, that’s not an open license to scam them, is it?

In the latest, a report by Avast has revealed a range of apps that are fraudulently charging users on the Google Play Store posing as offering add-ons for the famous Minecraft game.

With the apps falling into the category of Fleeceware; where apps usually offer free trials and then eventually end up charging exorbitant subscription fees, the specific offerings of these scammers include wallpapers, skins, and other modifications that would seem attractive to users of the game.

However, once they install the app and seamlessly start a free trial, a subscription plan is automatically charged to the user, often without their knowledge for a hefty fee, the highest of which has been seen to be $120 a month in this case.


The scam rests on the proposition that maybe the user would forget that they had signed up for a trial in the first place. In response to this, Ondrej David, malware analysis team lead at Avast stated in their report that:

Scams of this nature take advantage of those who don’t always read the fine print details of every app they download. In this case, young children are particularly at risk because they may think they are innocently downloading a Minecraft accessory, but not understand or may not pay attention to the details of the service to which they are subscribing, 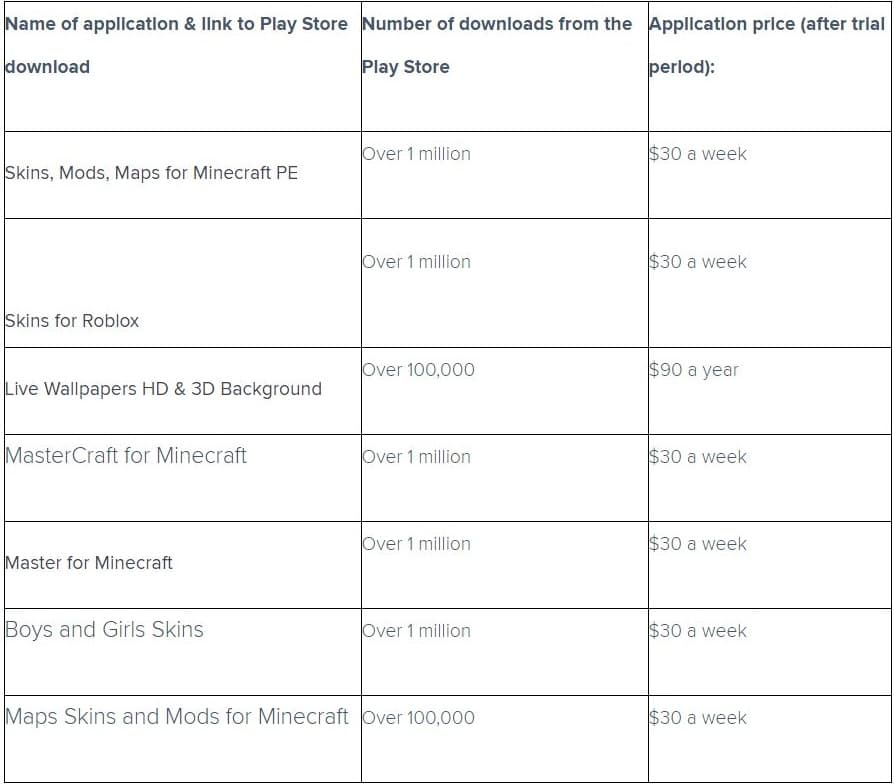 Currently, 7 such apps have been reported to Google by Avast but according to the latter, they are still out there active. This means that many more can become victims before Google takes action. This becomes even more alarming considering that 5/7 of them are said to have over 1 million downloads – no small number.

To conclude, as with every such case, we would advise users to always look at the reputation and reviews of an app before downloading it. In fact, in this case, most such apps are said to have 1-star reviews – a classic red flag for people to recognize.

If you have installed any such app that looks suspicious or has been charging you subscriptions, it is important to cancel the subscription first through Google Play Store before uninstalling the app.