Recently, Microsoft was successful in gaining control of 50 domains which were allegedly being used by a North Korean Black Hat group of hackers known as Thallium and APT37 to conduct large-scale cyberattacks.

This news was publicly known when on December 27, a U.S district court released details on the firm’s work and how it authorized them to take down these domains.

A work of Microsoft’s Digital Crimes Unit (DCU) and the Microsoft Threat Intelligence Center (MSTIC), these targets were primarily based in the U.S, Japan & South Korea and came from a variety of backgrounds. According to Microsoft’s blog post, these targets included,

The attack was sophisticated and employed effective information gathering using open-source intelligence and then lured users through spear-phishing.

Pictured below is one such example shared by Microsoft where a very legitimate-looking email has been crafted to trick users. Once a user clicks on the button’s link, login credentials are asked for which helps Thallium compromise the user’s account and view all associated activities. 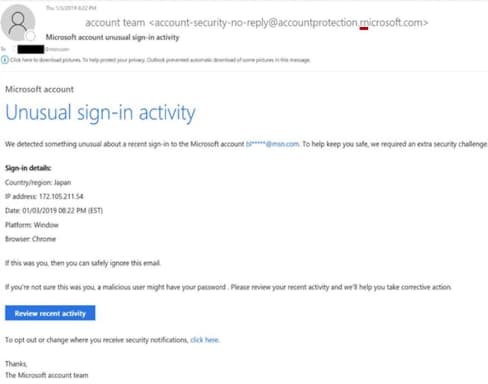 Another interesting trick employed is that they add a mail forwarding rule to the victim’s account automatically receiving every email that the user gets in their inbox without having to maintain access to his/her account. Additionally, the group has also been found installing malware named “BabyShark” and “KimJongRAT”  on user systems to extract information.

These have undoubtedly played a great role in securing the internet and more importantly will continue to serve as a vital part of  Microsoft’s CSR role. In light of this, for users, it is recommended that they take basic security precautions such as employing two-factor authentication, having reliable anti-virus software on their devices and keep check of their account’s activity logs.